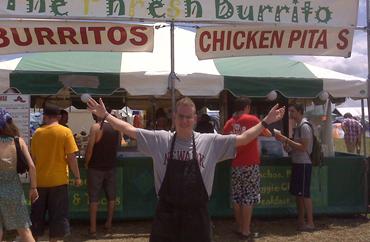 My Brother Matt at Bonnaroo '09

I always knew that I wanted to own my own business as a kid watching my father run his as I was growing up.  I was really into seeing live music at festivals in the 90's and I always remember eating at the food vendor tents at festivals. Everyone looked like they were having a blast and living a free lifestyle which was very attractive to me. So I decided that was the life for me!! In 2002 I started with a couple of EZ ups and some restaurant equipment and started doing food at festivals. It was a rough start  but after a year we had it down. I decided that I needed a mobile easy setup that I could do locally in the Central OHIO area and in 2006 I acquired the "shell" which would eventually become The Burrito Bus. I wanted to take what we did at festivals and put it into a truck. That was how The Burrito Bus concept was born.  In 2007-2008 we were one of the first few food trucks in the Columbus area.